BARODA, India, Feb. 5, 2021 /PRNewswire/ — Patel Infrastructure Ltd, an established construction, development and maintenance service company created history for a First-time World Record by entering the Golden Book of World Records and India Book of Records. The Company adds another milestone to its impeccable work portfolio in the four record titles that the construction project has achieved are – 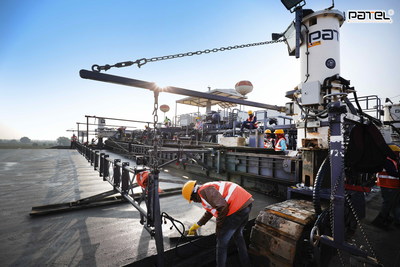 Speaking on achieving the accolade, Mr Arvind Patel, Managing Director, Patel Infrastructure Ltd said, “We are ecstatic to have achieved this colossal task and be a part of the history books in the Indian road construction industry. The nature of constructing a civil project involves many factors that are to be aligned. We endeavoured not to set benchmark only in the segment of road and highway construction but to also do so in a responsible manner.”

Mr. M K. Chaudhary, Adjudicator of India Book of Records, said, “Patel Infrastructure ltd. has done a marvellous job creating the concreting history. They have made the four records in construction of Eight-lane expressway in one go within 24 hrs. The Company made it possible with a well-managed group of multi-level people working in a synchronised method, implementing micro-level planning by deploying skilled manpower and machineries especially 18.75 mtr largest width of slip-on form of paver machine in the world as acclaimed by the manufacturer. As we feel, this would be the milestone to change the scenario of road construction.”

The Company was founded in 1972, by the late Sh. Vithalbhai Gobarbhai Patel, a partnership firm named Patel Construction Company, was formally incorporated as a Private Limited Company in 2004. Patel Infrastructure Ltd is an established construction, development and maintenance service company mainly involved in the business framework of construction of roads and highways, bridges, irrigation and mining projects, construction of commercial buildings, and other ancillary services like toll collection, operation and maintenance of highways.

Story has been sourced Source link