– The exclusive event held in Havana, Cuba, was attended by people from 43 countries and renowned national and international artists, such as James Morrison, who was in charge of giving the closing concert of the evening

– During the event, two unique humidors in the world were auctioned for which 2,900,000€ were raised, funds that will go entirely to Cuban Public Health

HAVANA, Sept. 10, 2022 /PRNewswire/ — The long-awaited celebration of the 55th anniversary of Cohiba, Habanos’ most emblematic and prestigious brand, took place in Havana, Cuba, the birthplace of what is considered the best cigar in the world. For three days, Habanos, S.A. offered its guests a full program of activities starting with a Welcome Cocktail, followed by a visit to the El Laguito Factory and ended with the acclaimed Gala Dinner.

Two years after the last Habano Festival, Cuba was once again visited by aficionados of Premium cigars, especially Habanos, with a Welcome Cocktail for 650 lucky people. Attendees were treated to a magical evening with an experiential journey through the brand’s more than five decades of successful history and its main Lines: Classic, 1492, Maduro 5 and Behike.

There was also a visit to the emblematic El Laguito Factory, where the Cohiba brand vitolas have been produced since 1966, ensuring the delicacy and quality of these Habanos.

The final touch was provided by the exclusive Gala Dinner with 650 attendees from 43 countries and focused on the novelties that Habanos, S.A. presented on the so-called “Cohiba Year” with its launches Cohiba Ambar, Cohiba Colección Ideales and Cohiba 55 Aniversario Edición Limitada.

This dinner was the culmination of all the celebrations held around the world to commemorate Cohiba’s 55th anniversary. An event full of tradition, luxury and moments of pleasure with the Habano as the protagonist, which has received international recognition from the most demanding aficionados. Since its birth in 1966, Cohiba has been synonymous with exclusivity, tradition and quality. The gala was attended by renowned artists with long careers such as César López, Miguel Patterson and Manolito Simonet, as well as by leading figures from the music scene such as Niurka González, Haila, Lily Daly and Mayko D’Alma, and artists with innovative proposals such as Camila Rodhe, Geidy Chapman, Emilio Frías “El Niño,” Vocal Renacer or Tenores Los Clásicos. The evening ended with a concert by the internationally renowned James Morrison.

According to Leopoldo Cintra González, Commercial Vice President of Habanos, S.A.: “In addition to luxury and exclusivity, Cohiba is synonymous with the work and effort of generations that have managed to make it the most recognized Habanos brand worldwide.” He added: “How could it be otherwise, such a singular date deserved some launches at the height of what we call the “Cohiba Year” with three unique and special vitolas such as Cohiba Ámbar, Cohiba Ideales, and Cohiba 55 Aniversario Edición Limitada.”

During the event, and for the first time outside the framework of the Habano Festival, the auction of two unique humidors was held. All the Habanos they contain were made “ Totally by hand with long filler“ and by the best torcedores of the El Laguito Factory. The proceeds will go entirely to Cuban Public Health.

The Cohiba 55th Anniversary Humidor, worth 2,800,000€, contains 550 Habanos from all the prestigious brand lines and represents a tribute to Cohiba’s success story. Made with precious woods, mother-of-pearl, and Swarovski on the outside and okume and mahogany on the inside.

Humidor Rare Le Rituel & Cohiba Ambar, worth 100,000€, was made to include a bottle of Champagne Rare Milésime 1988 and 44 Cohiba Ambar. It is the first of a series of 10 Limited Edition Humidors handcrafted on demand by the prestigious artisan workshop Elie Bleu, which has been making humidors for tobacco since 1976.

The 2020 and 2021 Habanos Awards were also presented to Eulalio Bejarano and Riad Boukaram in the Business category, Walid Saleh and Angel Garcia Muñoz in the Communications category, and Vicente Fausto Torres and Nelson Rodriguez Lopez in the Production category.

PARIS, Sept. 30, 2022 /PRNewswire/ — For the next installment of her High Jewelry collection “Beyond the light”, Valérie Messika presents 29 silhouettes adorned with diamond sets, each more magnetic than the next. A show filled with femininity, modernity and avant-garde designs, playing on volumes, light effects and unexpected styling.

These bold pieces embody the emblematic codes of the House: to dare, to surprise and to excel.

Closing the show, the iconic supermodel Naomi Campbell was adorned with the masterpiece necklace from the “Akh-Ba-Ka” collection.  The exceptional diamonds in this necklace were cut from the same 110-carat rough stone and which alone has 2,550 diamonds, creating a total of 71.49 carats.

The friends of the Maison gathered together to celebrate this exceptional fashion show, with a DJ set by Diplo.

A unique High Jewelry evening that opens up an exciting new horizon for Messika.

A selection of pictures are available hereby: https://we.tl/t-H4cwwHw818 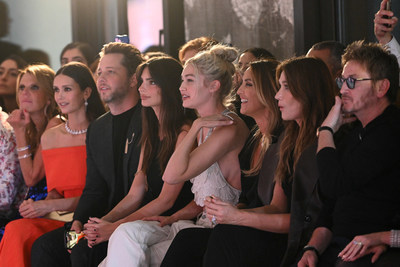 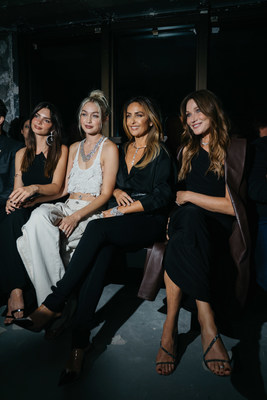 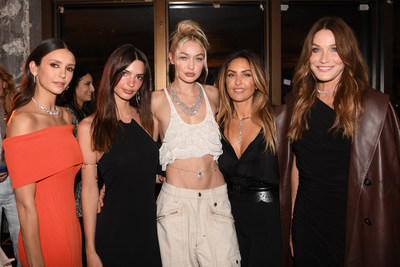 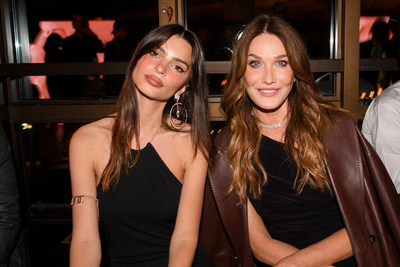 SAN FRANCISCO, Sept. 30, 2022 /PRNewswire/ — Hevo Data, the intuitive data pipeline platform, today announced that it has been recognized as an Integration & Modeling ‘one to watch’ in the inaugural Modern Marketing Data Stack Report: Your Technology Guide to Unifying, Analyzing, and Activating the Data that Powers Amazing Customer Experiences executed and launched by Snowflake, the Data Cloud company.

Snowflake’s data-backed report identifies the best of breed solutions used by Snowflake customers to show how marketers can leverage the Snowflake Data Cloud with accompanying partner solutions to best identify, serve, and convert valuable prospects into loyal customers. By analyzing usage patterns from a pool of nearly 6,000 customers, Snowflake identified six technology categories that organizations consider when building their marketing data stacks. These categories include:

Focusing on those companies that are active members of the Snowflake Partner Network (or ones with a comparable agreement in place with Snowflake), as well as Snowflake Marketplace providers, the report explores each of these categories that comprise the Modern Marketing Data Stack, highlighting technology partners and their solutions as “leaders” or “ones to watch” within each category. The report also details how current Snowflake customers leverage a number of these partner technologies to enable data-driven marketing strategies and informed business decisions. Snowflake’s report provides a concrete overview of the partner solution providers and data providers marketers choose to create their data stacks.

“Hevo’s strong performance and innovative approach within Snowflake placed them within the ‘ones to watch’ category due to their demonstrated customer success,” said Denise Persson, Chief Marketing Officer at Snowflake. “We look forward to observing their continued momentum in empowering our joint customers, and collaborating on our journey to data-driven marketing.”

Hevo Data was identified in Snowflake’s report as a ‘one to watch’ in the Integration & Modeling category for the ease with which it enables modern marketing teams to achieve accurate, near-real time analytics by integrating and transforming raw data from all their data sources with low latency and zero maintenance.

“Being recognized as a company to watch in Snowflake’s Modern Marketing Data Stack report is a testament to the dedication Hevo demonstrates to our customers,” said Manish Jethani, co-founder and CEO of Hevo Data. “We look forward to continuing to partner with Snowflake to create innovative approaches that empower our customers to adopt a best-of-breed marketing data stack to advance their business and serve their customers.”

Click here to read The Modern Marketing Data Stack: Your Technology Guide to Unifying, Analyzing, and Activating the Data that Powers Amazing Customer Experiences. About Hevo: Hevo is an intuitive data pipeline platform that modern data analytics teams across 40+ countries rely on to fuel timely analytics and data-driven decisions within their organizations. Hevo helps them reliably and effortlessly move and sync data from 150+ SaaS apps and other data sources to any cloud warehouse and turn it analytics-ready through intuitive models and workflows.

“Sustainability is a megatrend that many companies are adapting to by developing forward-thinking, socially responsible strategies. An emphasis on sustainability also paves way for opportunities in process and technology innovation,” said Aroop Zutshi, Director, Frost & Sullivan Institute.

Frost & Sullivan Institute follows its proprietary, 8-step, measurement-based methodology, combined with extensive research, in-depth analyses, and benchmarking, to shortlist deserving companies.  Our Global think tank does a comprehensive review of all perspectives on where and how companies enhance the future of the planet.  With performance indicators such as growth excellence, innovation to zero on key global priorities, customer value chain, and technology innovation forming the basis of the selection process, the winners represent the best of the best.

Frost & Sullivan Institute congratulates all recipients of the Enlightened Growth Leadership Best Practices Recognition. As we did last year, we will recognize and celebrate the 2022 recipients at our Virtual Awards Banquet in November.

The Frost & Sullivan Institute (FSI) is a non-profit organization dedicated to utilizing business practices to address global priorities. The genesis of the institute goes back to the vision of either creating, or becoming part of, a solution that addresses threats to humanity. The Institute has identified strategic imperatives for transformation and believes that we can truly accelerate innovation to zero. To learn more about FSI, visit www.frostandsullivaninstitute.org

For six decades, Frost & Sullivan has been world-renowned for its role in helping investors, corporate leaders, and governments navigate economic changes and identify disruptive technologies, Mega Trends, new business models, and companies to action, resulting in a continuous flow of growth opportunities to drive future success. Contact us: Start the discussion.

Healthy snacks that boost energy and focus at work

BJP is going to build 16 new garbage mountains in Delhi

UP: Woman kills husband with Axe in property dispute

In a workshop, IAS officer said, girls have to change their thinking, know what else they said

In response, a senior woman IAS officer said that there is no end to this demand. She further said, 'You...

Government increased dearness allowance of central employees by 4%, this would benefit 50 lakh employees

Along with this, the work of redevelopment is going on in 199 railway stations of the country. Tenders have been...

Twitter denies Elon Musk’s claim of fake accounts, you also know what is the news

Documents obtained from two data scientists employed by Musk showed they estimated in early July that the number of fake...

Yogi cabinet will have an important meeting, dozens of proposals may be approved

It is being told that more than a dozen proposals can be approved in the meeting to be chaired by...

Female air hostess. When the police reached the spot, the woman told that a person named Harijit Yadav, whom she...

People will be able to watch live streaming of Constitution Bench hearing, beginning with Uddhav vs Shinde case

It started today with the Uddhav vs Shinde case. Senior advocate Kapil Sibal argued on behalf of the Uddhav faction.

. So the same, NIA team raided Delhi's Shaheen Bagh on Tuesday morning and detained 30 people. The NIA had...

After leaving the job, Pulkit, Saurabh and Ankit put a lot of pressure on me to return to the job....

It was inaugurated when I became the Prime Minister. A huge amount of money was wasted due to this delay....

BJP MP Janardan Mishra cleans the school toilet with his hands, shared the video on Twitter

When the MP saw that the toilet of the center was very dirty, it was not cleaned, he decided to...